Some might call it the most pivotal day in the long, storied history of HPM Building Supply.

Michael Fujimoto was 8 years old, but the moment remains etched in his brain.

It was May 23, 1960 and for the second time in 15 years, a tsunami had demolished HPM’s flagship Hilo store. Only the floor tile was left to mark the spot of the building that the Fujimoto family had opened only five years earlier to be the permanent replacement to the original store destroyed in the 1946 tsunami.

A sleepy Mike walked into his family’s living room that morning and saw his grandmother and father having a tense conversation.

“My dad was sitting in an armchair, and he was sitting erect with his feet on the ground, and his arms were holding tightly to the arms of the armchair,” Mike said.

Mike’s grandmother was sitting on a couch, she was bent over, her head buried in her hands and she was crying, Mike said. “And she kept on telling him, ‘Bobby, give up. Close the business. Not worth it.”

Bobby didn’t say anything at first as he listened to his mother’s plea. Finally, he said, “No, we are going to rebuild. We are going to continue – as HPM.’”

Breaking free from the plantation

HPM founder Kametaro Fujimoto immigrated from Hiroshima, Japan when he was 16 to work on a Hawaii Island plantation but found a way to become a general contractor. Unhappy with the supply and pricing he was getting from stores controlled by the plantation owners, Kametaro and some partners began Hawaii Planing Mill in the quickly growing Japanese neighborhood along the Hilo waterfront known as Shinmachi. HPM is believed to have been the first planing mill started by immigrants.

Years later, Barney Fujimoto, Kametaro’s eldest son, increased HPM’s product lines even as the Navy assumed control of the company during World War II under the War Powers Act. Less than a year after the war, the devastation of the April 1, 1946 tsunami left Barney with the job to rebuild the facility and the business.

Bobby, Barney’s son, not only rebuilt the Hilo store but expanded the business by adding branches in Kona and Waimea while broadening the variety of services to meet the needs of its loyal customers. Bobby’s insistence that HPM’s workers share in the company’s successes led to the establishment of a profit-sharing plan in 1959 and then the employee stock ownership program in 1977. 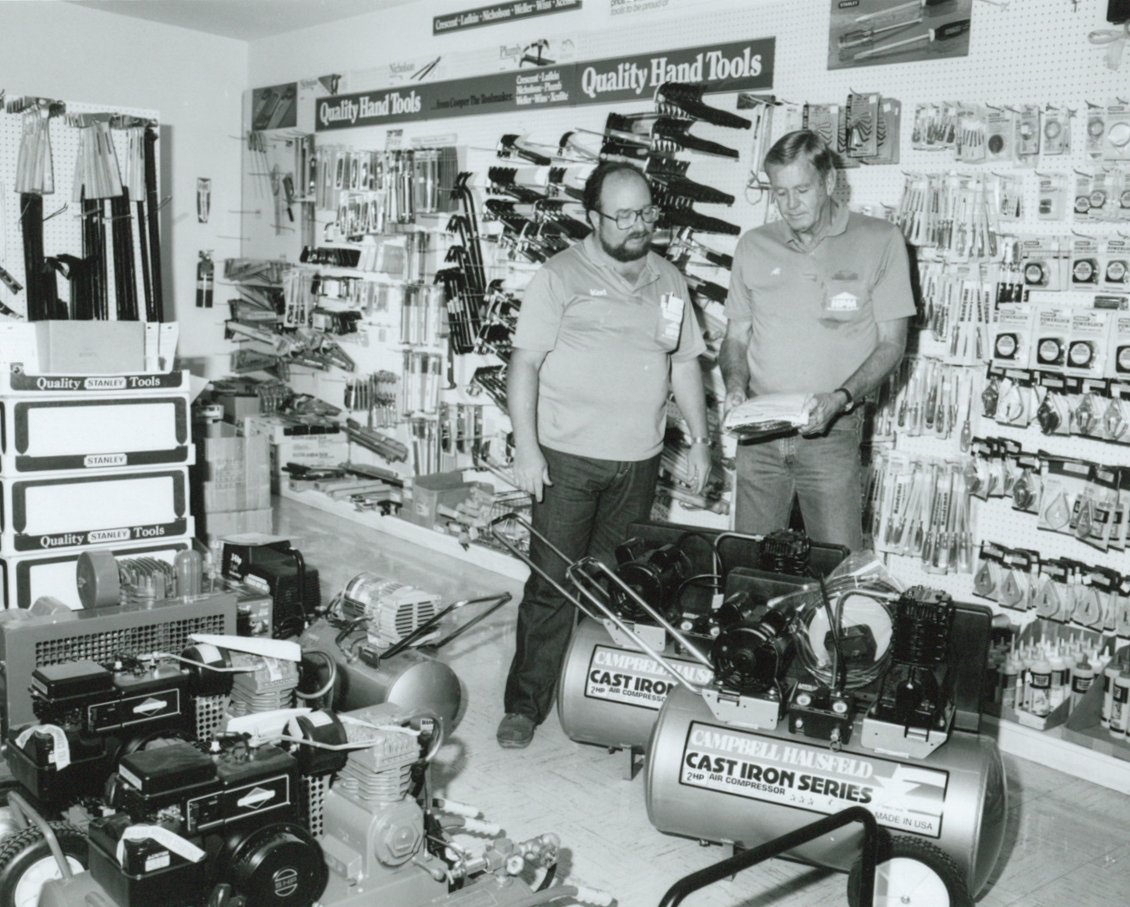 Ted Doi, a project manager at the Waimea branch, said the decision to become a rare 100% employee-owned company shows perfectly how the Fujimotos value everyone who works at HPM.

“I appreciate the Fujimoto family and what they have done for the associates of HPM,” Doi said. “And during the difficult times, they’ve tried to keep us employed.”

Adam Bauer, HPM’s chief operating officer, recalls that early on during his time as company finance director, he and Bobby were driving back together from Kona when the former president asked him what he thought was his most important job at the company.

When he began responding to Bobby’s question, he began talking about keeping HPM financially viable, he was interrupted. “He said ‘No, no. Adam, your answer should always simply be that your job is to take care of the employees. And that’s always stuck with me,” Bauer said.

Both Mike and current president Jason Fujimoto, Mike’s son, fought through the financially difficult times brought on by global economic downturns, including the Great Recession of 2008, while fighting off the onslaught of competition brought by big-box stores. But more than just survive, the company grew. It extended its reach to Kauai, Maui and Oahu while further expanding the products and services provided to its customers from custom metal roofing to steel framing to home plans.

Before he retired several years ago as program manager for HPM’s Hilo Home Design Center, Mark Abril worked with three generations of Fujimotos. Bobby developed mutually loyal relationships with his employees and his customers. Mike was forward-thinking and an innovator driven to move the company forward by developing its infrastructure, processes and a culture of doing things right.

“And then Jason, I see Jason taking all of that on, and then introduce more technology,” Abril said. “And I am blown away by the amount of technology that’s prevalent today in running this business.” I look at all of it and I just go ‘Wow Jason, awesome!’” And more than ever, he said, there’s an even greater sense of ohana.

Michael reflected back on Bobby’s decision that fateful day in 1960 as well as the other leadership qualities that defined his father, Barney and Kametaro.

“That perseverance, that quality that certainly was there with my father, his father, and his father’s father, that ability to stick it out, to do what’s best for our community, and what’s best for our employees, no matter what,” Mike said. “Through thick or thin, this is what we do. And we must be the best at what we do and stick with it. So long as we can add value to our community, we’ll be fine.”

Jason remembered that Bobby pointed out to him that the 1960 tsunami struck the year after HPM began it’s profit-sharing plan. When the employee received their first benefits shortly after the disaster, “they all told my grandfather ‘Bobby, you know what? To help you rebuild the business, we want to put the money back in and help HPM get back on its feet.’” Bobby declined the offer, but it was something he would remember through his life.

Jason, who left his investment banking career to return to HPM, looked back on growing up in Hilo and the emphasis on community spirit and relationship-building that helped both the company and the town not just survive, but thrive.

“It goes back to relationships,” Jason said. 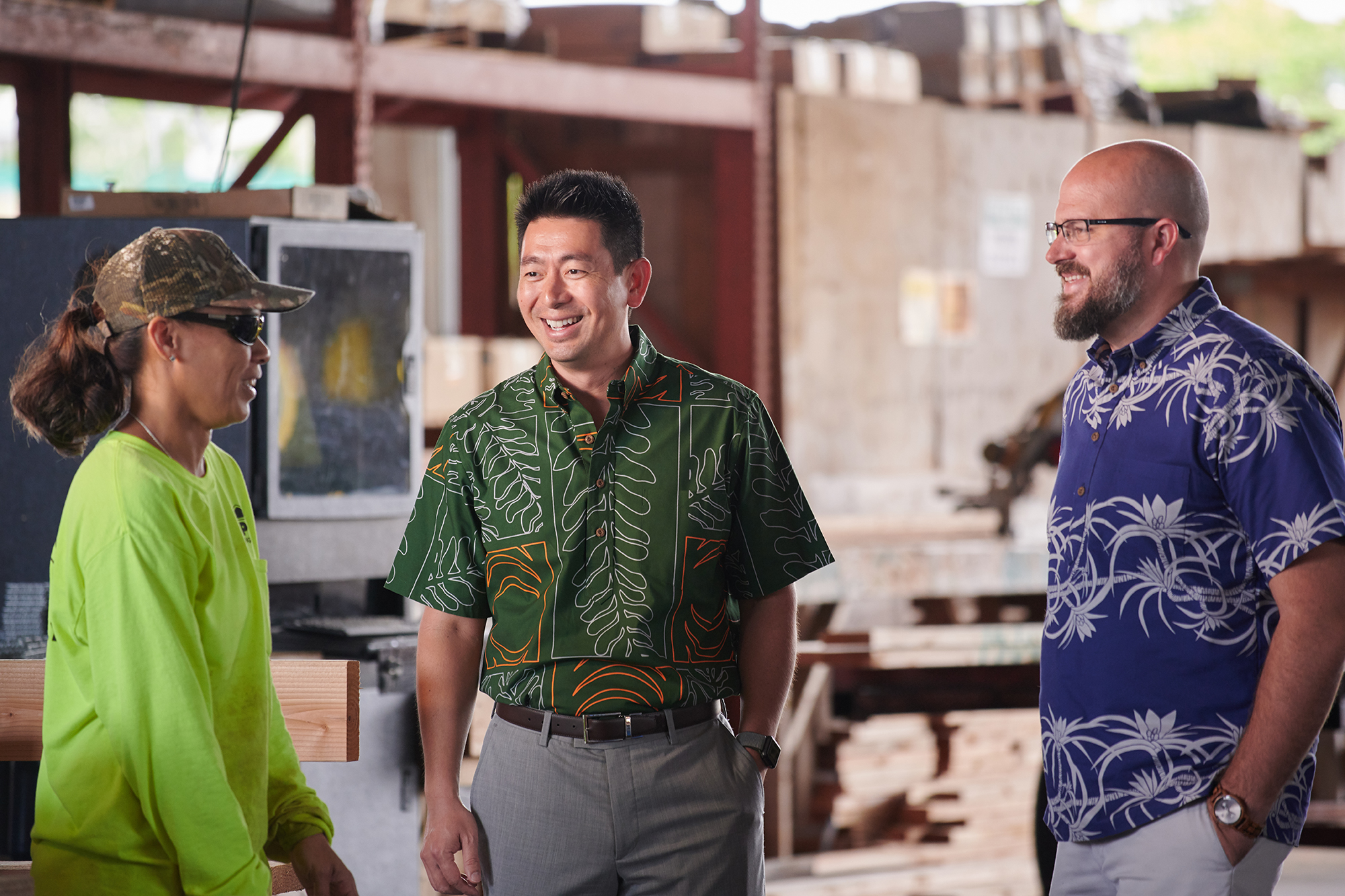 As HPM moves into its second century, those same qualities continue to hold a treasured place in HPM’s culture and are reflected in the company’s core values of “Heart, Character and Growth.”

Like HPM, Hilo-based Isemoto Contracting Co. is a family-owned business that’s emerged stronger from the adversity that the Big Island has had to face in the last century.

The companies have often worked side by side, both playing key roles as the island has developed and grown.

Les Isemoto, president of the 95-year-old company, said he appreciates HPM and Isemoto have experienced the same challenges over the last century and emerged with similar values.

“You treat your employees like you would your own family,” he said. “They’re great people, always willing to help,” Isemoto said. “They started out very small but have expanded greatly.”

The owners of both companies “instill in us that we are all one family, that we succeed together or we’ll fail together.”

Both Mike and Jason have always been attentive and accommodating to the needs of his company, Okamura said. When he first arrived on Hawaii Island, Mike made it clear “that he would do anything to help me succeed within our company.”

Toby Taniguchi, president of family-run, 105-year-old KTA Superstores, said the Taniguchis and Fujimotos have always worked well together and that his late father, Barry Taniguchi, considered “Uncle Bobby” a mentor.

Hawaii County Councilman Aaron Chung remembered Bobby as a humble and soft-spoken guy. “Bobby, no matter how successful a person he was and how respected he was throughout the state as a community leader, he was always respectful and treated everyone with dignity no matter what their rank in society was. And he always would listen more than he would talk.” 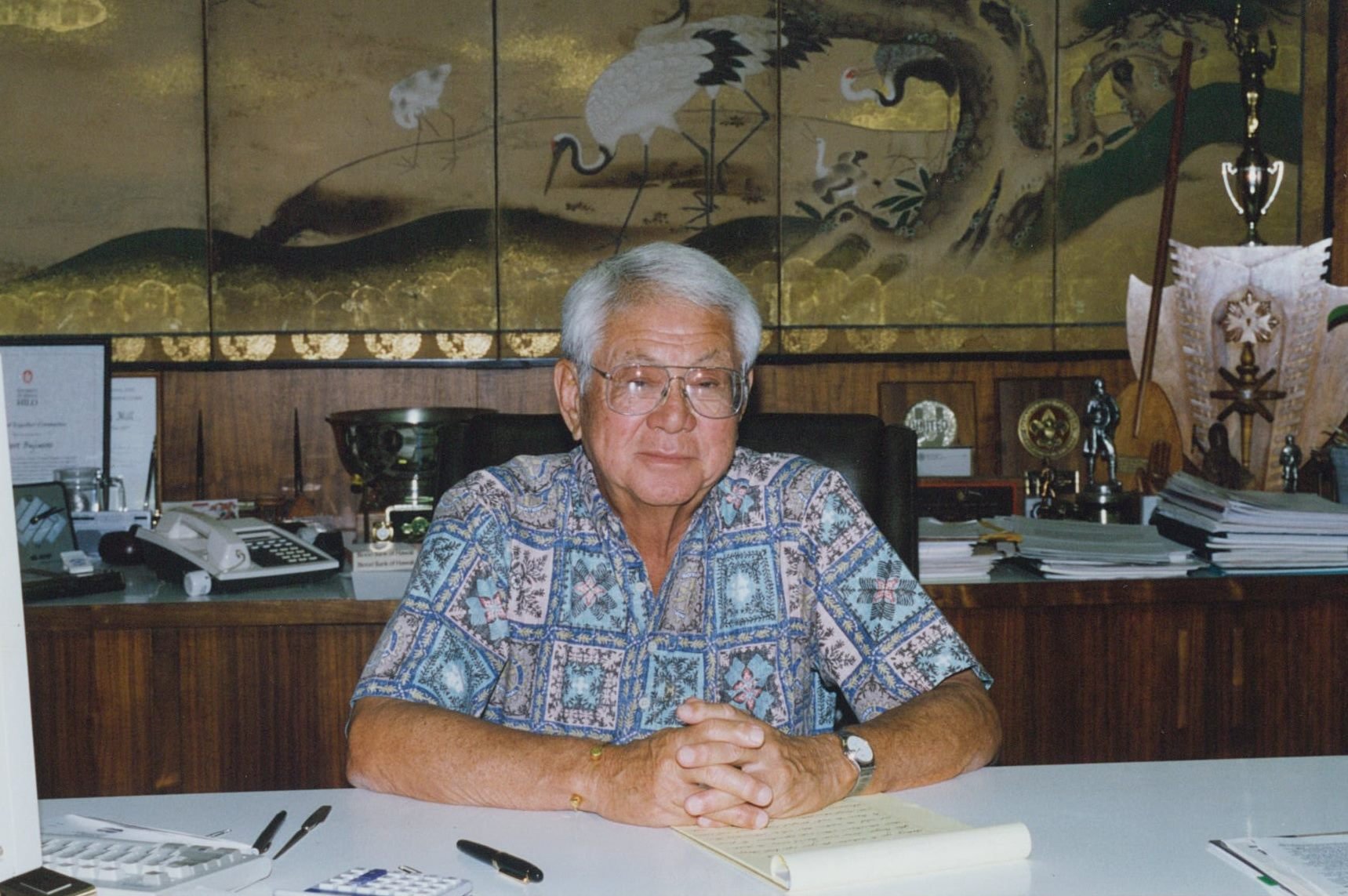 The idea that HPM is turning 100 is “mind-blowing” given the challenges the company and Hilo have faced over that time, Chung said.

“It’s just a heartwarming story of how people have a vision and they’re just not going to give up, overcoming adversity. “It just says something about their leadership, their business model and their commitment to the community and their employees.” 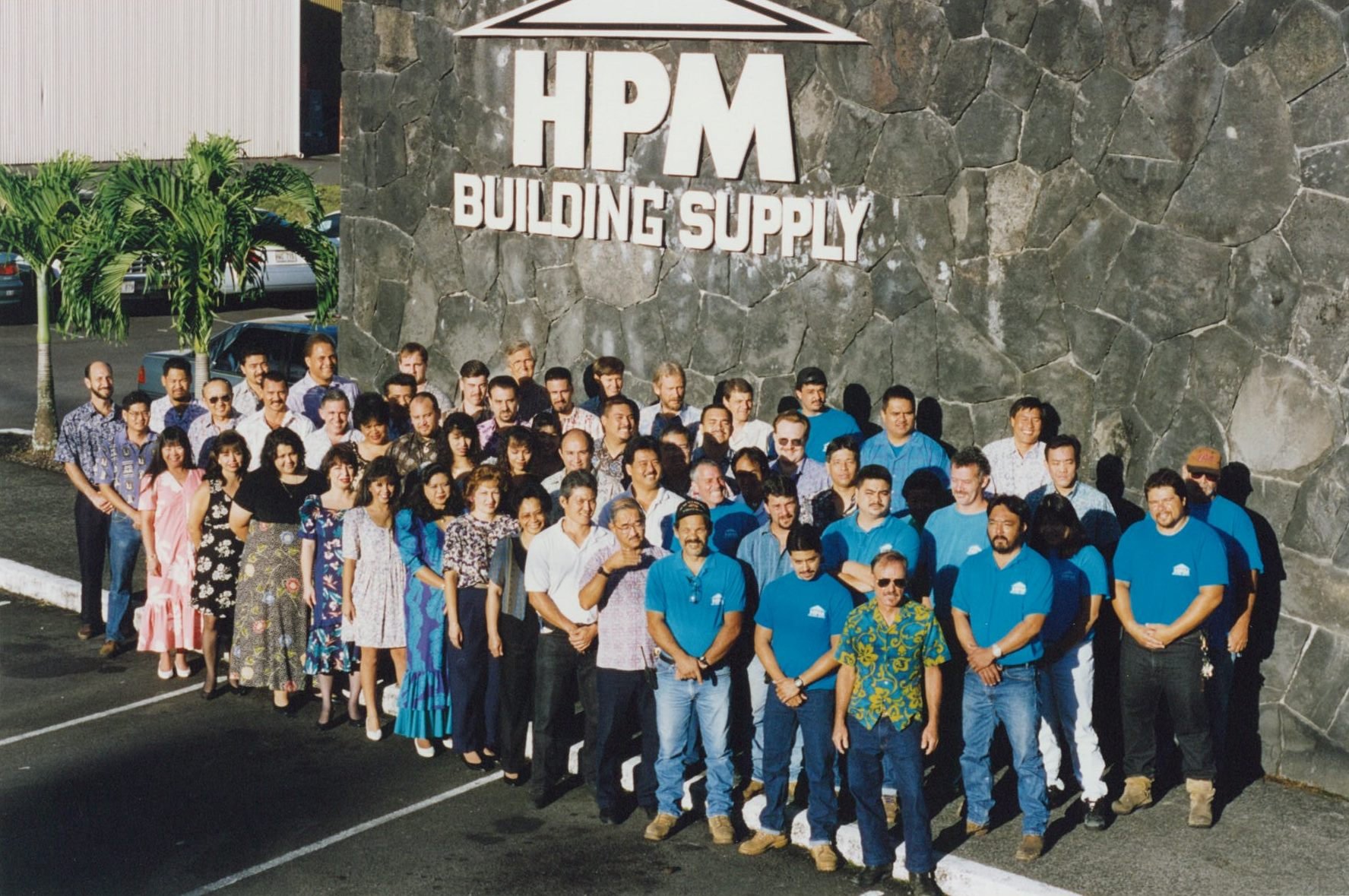 11. 3. 2021
To serve customers on the north and west sides of Hawaii Island, we have a store in Waimea and Kona. You don’t have to trek to the east side for your
Read More

Our Kauai customers enjoy our huge selection of remodeling and construction products in Kapaa and Lawai. We stock goods to improve houses inside and

HPM has three East Hawaii locations—two in Hilo and one in Keaau—that encompass all of our offerings.